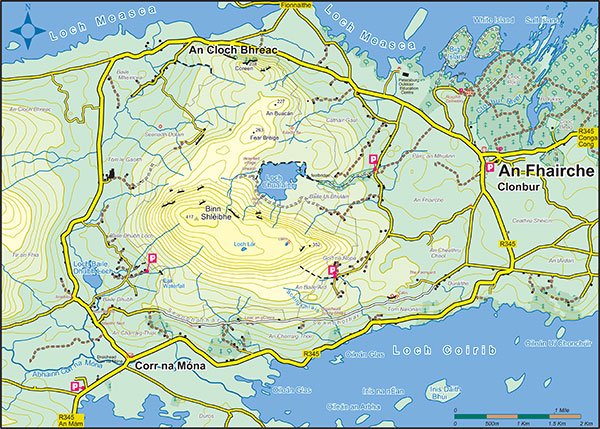 Sean Bhóthar connects Clonbur and Corr na Mona along the foothills of Mount Gable. It is not really known how long this road is in existence but according to local folklore, it is the route St Patrick took when on pilgrimage to Maméan, which is just west of Maam. The Ordinance Survey Map dated February 14th 1840 shows the route. At the time of the 1901 census there was 11 inhabited dwellings on the Sean Bhóthar. Irish was the spoken language and subsistence farming was the dominant way of life. Over the years, some emigrated while others built houses closer to the main road. However there are still close relatives of inhabitants from all the ruins, living in the area. The last inhabitants of the Sean Bhóthar moved to a new house closer to the main road in the 1970’s.

The Sean Bhóthar was brought back to the life in 2000’s when it was developed as a linear walk, 10km long, with an average time to walk of two hours. It is a surfaced path with some inclines. The route follows along the side of Binn Shléibhe/Mount Gable with stunning views of Lough Corrib.

There is parking at both ends. When you leave the Sean Bhóthar at the Clonbur end and walk towards the village you will be rewarded with beautiful views of Lough Mask and the Partry Mountains to the north.